Ragula Bhaskar, Ph.D. President & CEO
A successful business is the result of immense hard work, dedication, and perseverance. However, to retain power in the marketplace, it is imperative for businesses to innovate. And, the key to innovation lies in lateral thinking. When exploring new ways to address an intractable problem, an inventive mind always thinks ‘outside the box’ to find an unconventional yet effective solution. By doing so, they create a broader spectrum of possibilities. Ragula Bhaskar, Ph.D. and the President and CEO of FatPipe Networks, can also be deemed as one such lateral thinker. He revolutionized the enterprise networking landscape by introducing a unified network traffic management approach to attain the highest levels of optimization, reliability, security, and acceleration of wide area networks (WANs).

Bhaskar saw that one of the major challenges networking companies commonly faced was reducing the network traffic and preventing failure without compromising on the security and speed of the internet. The existing WAN technologies were unable to offer the required levels of reliability, redundancy, dynamic load balancing, and security features. Bhaskar realized the solution to the problem lied in providing a system that has multiple low-cost lines combined to make one secure, virtual high-bandwidth connection. To turn this innovative idea into reality, he established FatPipe Networks.

FatPipe’s line of innovative enterprise networking products displays an array of features and benefits for firms that run mission-critical applications over WAN. These solutions offer companies the ability to centrally manage their WANs, administer branch office configurations, and deploy appliances with the zero-touch installation. A firm can easily add cost-effective direct internet access at a branch to increase available bandwidth. “So, even if one connection goes down, the other connections seamlessly share the load and keep the network up,” informs Bhaskar.

Considering the role enterprise networks plays in keeping businesses on the move, companies simply can’t afford even minimal service disruption. So, having an uninterrupted connection is paramount for completing any critical information exchange. FatPipe provides a sub-second failover in the WAN, which enables session-connectivity without having to restart the session in the case of line failure, thereby reducing potential traffic security concerns.

Additionally, FatPipe also provides a patented technology on selective encryption that allows customers to encrypt only some lines like the non-multiprotocol label switching (non-MPLS) lines. “This saves a customer about 40 percent of the bandwidth in comparison to expensive MPLS lines. On top of that, we can carry out an optimization that saves you about 75 to 90 percent of the bandwidth,” adds Bhaskar.

When it comes to FatPipe’s success in the networking landscape, the firm takes immense pride in being one of the first companies to offer robust, scalable, and proven products that address the changing concerns of network administrators. To provide a deeper understanding of how FatPipe’s technology works, Bhaskar cites a scenario: Consider a firm that has offices in multiple locations. Typically, the company would have one network connection or data stream between these offices. However, the single data stream that runs between these locations can break due to some unforeseen events. As such, the office-to-office network would immediately go down. At this point, to cause a data breach, all a hacker needs to do is tap into that one line of connection somewhere between the locations. With FatPipe’s technology, the firm can use multiple data streams, which run physically between the offices and are aggregated to appear as a single line. So, even if one of the lines between the locations temporarily goes down, the data load will be shifted to the remaining operational lines. 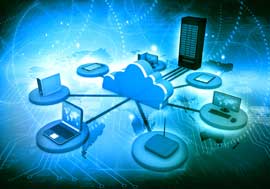 Moreover, with FatPipe’s patented security feature, MPSec (Multi-Path Security), businesses can increase the level of security up to nine times that of a single data stream network. MPSec performs deep packet inspection and parses packets to find the optimal path. Hence, for someone to cause a data breach, not only will they have to tap all of the data streams simultaneously, but the individual must also be aware of the proper encryption key to reassemble the data into a recognizable file.

For over three decades now, FatPipe has helped businesses across several industries, such as law, financial, education, and healthcare as well as local, state, and federal government entities have a more mature and accountable network. To that end, the firm has earned the trust of some of the world’s most recognized organizations, including Fortune 1000 companies. In fact, FatPipe recently received a rating of 4.9 out of 5 by Gartner, and 100 percent of customers reviewed stated they would recommend FatPipe. Treading ahead, the company will continue to develop new technologies that align with the market demands. At the same time, the firm is also looking to expand in Australia, Europe, and China. “Doing better is the way for FatPipe, and we will continue to combine our expertise with the right technology to ensure superior business continuity for our customers,” concludes Bhaskar. 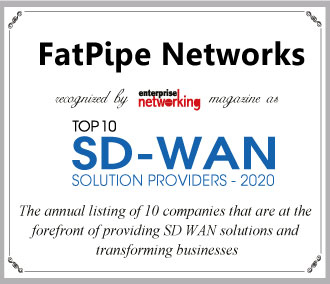 Description
A company that revolutionized the enterprise networking landscape by introducing a unified network traffic management approach to attain the highest levels of optimization, reliability, security, and acceleration of wide area networks (WANs). FatPipe’s line of innovative enterprise networking products displays an array of features and benefits for firms that run mission-critical applications over WAN. These solutions offer companies the ability to centrally manage their WANs, administer branch office configurations, and deploy appliances with the zero-touch installation. A firm can easily add cost-effective direct internet access at a branch to increase available bandwidth